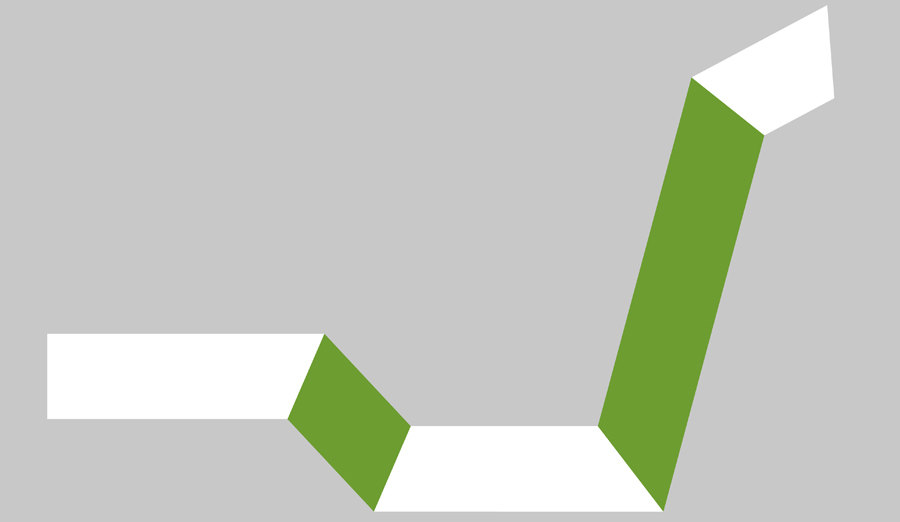 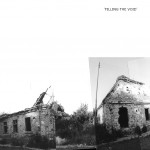 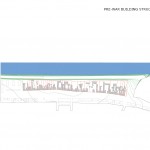 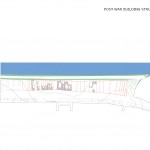 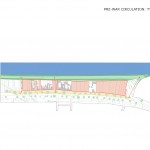 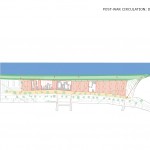 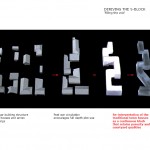 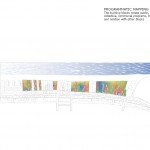 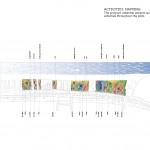 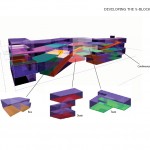 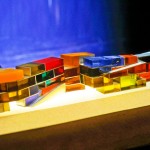 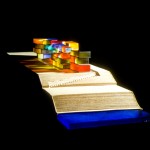 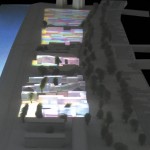 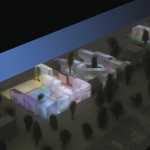 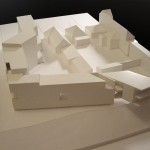 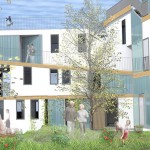 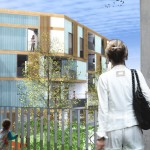 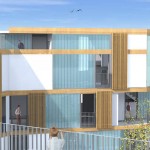 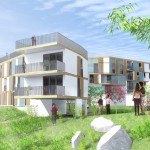 Vukovar is a town without centre – not without life, but without a coherent centre constituted by administrative and public buildings, a central square or ceremonial space. The shelling and the subsequent destruction of Vukovar has left large, empty areas in its midst. The most intriguing aspect of this tragedy is that it does seem of little consequence for Vukovar’s public life. The drastic changes brought upon by the war resulted in an altered use of the public space, its functions and controls. Loosely demarcated public, private, communal, and collective functions spring up in the centre for example around the bus terminal, which in-spite of the lack of buildings that would accommodate social exchange- demonstrate a strong sense for place and ‘publicness’. The appropriation of not clearly distinguished areas and zones puts the public life right on the streets. Water sports take place along the Danube embankment, the burned out shell in front of the Hotel serves as basketball court for the youth, the hotel’s privately owned lawn is used for socialising. Although such non-determined activities within the public sphere lay testimony to the well-being of an essential urbanity, the complete absence of buildings that focus and facilitate local cultural and social needs is both liberating and unsettling. The gaps in the torn fabric of Vukovar serve as the departure point for a series of consideration that regard the destruction as a curiously productive asset as it opened up a potential hidden by convention and routine.

The damage inflicted to the main road throughout the civil war eradicated the built fabric that once defined the threshold to the centre of town. In view of the scale of destruction the project addresses the strip as a whole. The difficulty of adding something ‘new’ into the existing context becomes apparent by the example of two recently built high-rise apartment towers. They fail to integrate any of the urban qualities of main road. No connection to the ground floor, no public amenities, no defined public spaces for socialising. Our project with the title ‘Filling the void’ addresses such an omission by taking the existing diversity of all plots into account. Along the strip six sites are identified that have the potential to transform the streetscape into an area that re-evaluates its relationship to the centre. It proposes a two-way strategy that outlines the landscape characteristics and subsequently architectural properties of the project.

The definition of the ground datum forms an integral element of the urban plan. The landscape proposal provides the transition from main road to the river embankment with its panoramic views of the Danube forest on the opposite side. The considerable depth of the plots -ranging between sixty and ninety meters- is organised by way of extending the green zone from the embankment into the plot and likewise, commercial and non-residential functions from the street front. The project suggests the planting of bushes and trees that ease the visual impact of the architecture while simultaneously providing a degree of privacy for future residents. Within the plots, the public are given access to diverse programs such as dwelling, shopping, work, allotment gardens and leisure activities. The programmatic mix accounts for the proximity to Vukovar’s central area and includes a crèche, sport and cultural facilities, as well as allotment gardens for the apartment towers. Public and private spheres intertwine in a relationship that carefully balances individual and collective aspirations.

The architecture follows the same theme of a highly differentiated public and private realm. It forms a symbiotic relationship with the ground datum and formally elaborates the permeation of the plots by non-residential programmes. The number of dwellings, or the respective density as outlined by the Europan competition brief is interpreted as 150 dwellings per hectare. This results in the provision of 242 number dwelling units for the competition site on the western edge of Main Road. The amount of apartments which had to be accommodated combined with the narrowness of some plots gave shape to long, slim apartment polarity of river and street. In wider plots these relations become more complex and work with the space between individual buildings. The changing orientation of the slabs demarcates the public and private zones of each parcel. In accordance to the private/public characteristics indicated by the ground scape, different layouts of the apartment slab were conceived. They accommodate different programmes including rentable spaces for social functions, roof gardens, commercial and dwelling units adaptable for office purposes such as doctors, law firms, small businesses or studio purposes.

Clarity and being lightweight were central concerns for the design of the apartments. Each flat is given access to a terrace which runs through the entire width of the slab. These excavations create an overall impression of transparency as well as enabling visual links perpendicular to the orientation of the buildings. Reflecting the shape of the slab, the spatial sequence of the dwellings offers at least two different orientations. A variety of floor plan layouts cater for changing in living patterns apart from the traditional family model. The concept of ‘Filling the Void’ defines an urbanism that is based on fragmented points of intense land use that have a local impact. The proposal avoids the trappings of a sweeping urban gesture, but beliefs in the macro scale mechanisms generated on each of the six sites. In this sense the architecture has been informed by its urban role and vice-versa.